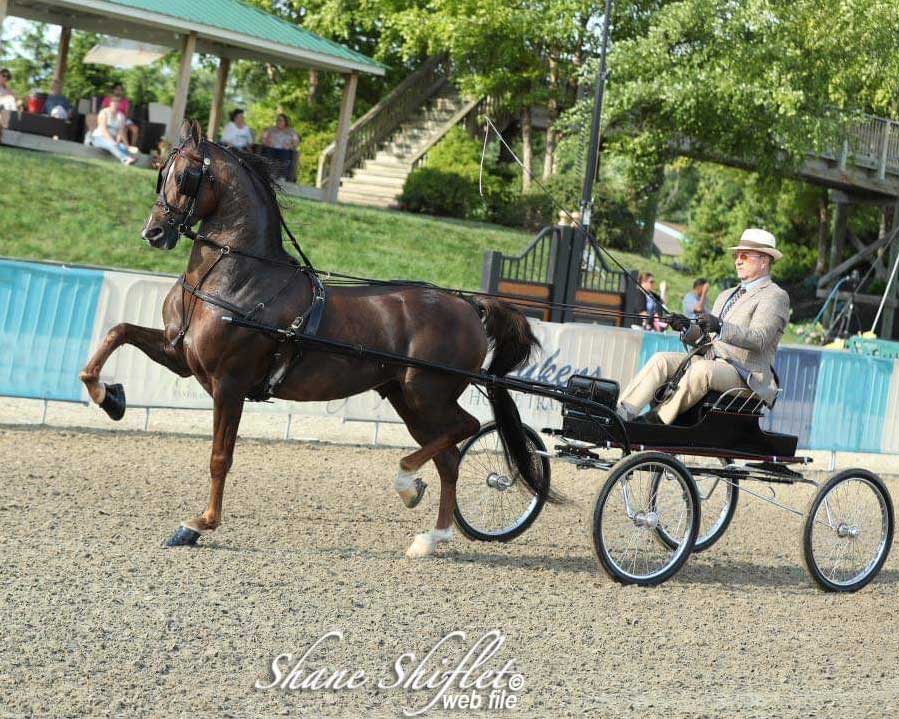 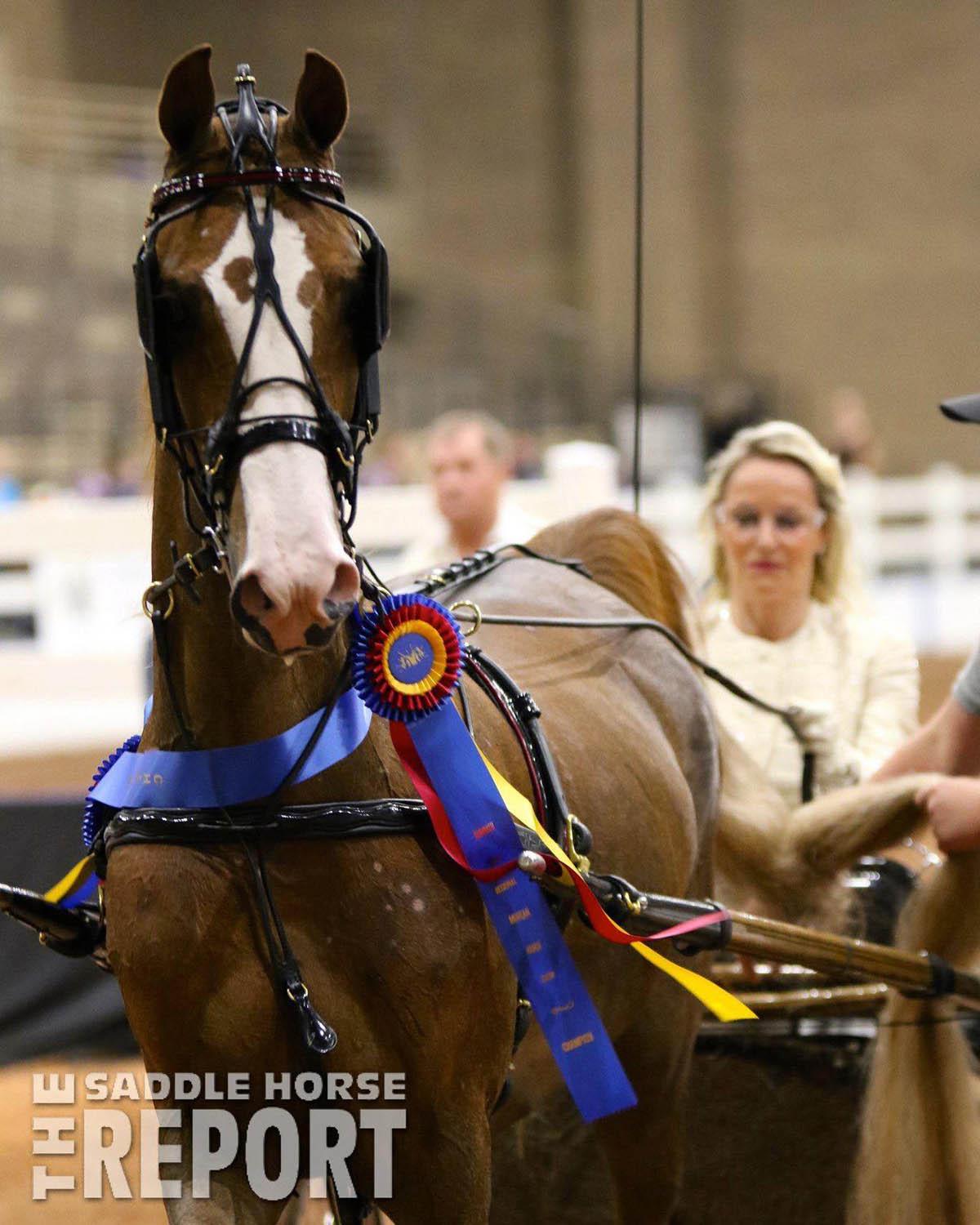 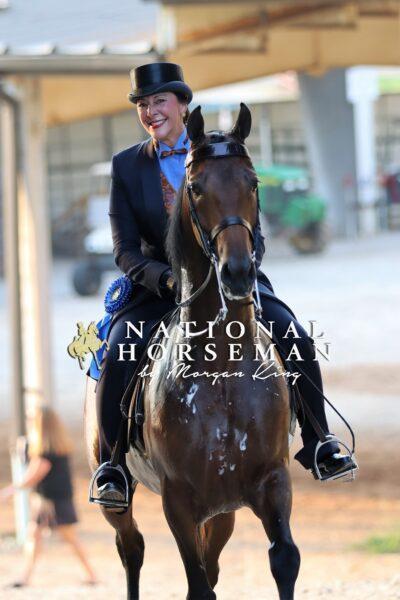 August 2021 — From coast to coast, Newmont Morgans are leaving an indelible mark on show rings and spectators for their style and beautiful Morgan type. We are so proud of these wonderful horses and their enthusiastic owners and just wanted to highlight their accomplishments this month!

At the 2021 Gold Cup Regional, NEWMONT’S LEGEND (MSV Shooting Star x FMB Peaches ‘N Cream) stood Reserve Grand Champion Stallion as a 2YO to stallions of all ages, as well as Junior Champion Stallion after winning the Two Year Old Colts qualifier. Under the direction of Reese Ritchie for owners Glittter Farms LLC of Oklahoma City. NEWMONT’S PEPPERMINT PATI (Minion Millennium x Paradigm Hot Chocolate) bested the Mares In Hand division with wins from Five & Over Mares clear up to Grand Champion Mare for owner Robert Morgan, with trainer Selvin Torrez at the lead. NEWMONT’S TIMELESS JOY (Treble’s Timepiece x FMB Peaches ‘N Cream) makes a beautiful picture with Ling Fu Wylie in the irons, and this elegant pair rode to a strong second in the Ladies English Pleasure qualifier under the direction of Tim Roesink at Grove Pointe. Owned by Dragonsmeade. Ling and Joy went on to be named Reserve Champion Amateur English Pleasure at the Blue Ridge Classic, after a good win in the Ladies English Pleasure qualifier. They also won the Ladies class at Gasparilla Charity earlier this year, as well as the English Pleasure Open Championship there.

At the 2021 Morgan Masterpiece, NEWMONT’S ANGELINA CH (Graycliff Tony GCH x Wiona’s Play Misty For Me) won the Youth Hunter Pleasure for owner for Abagail Meyer, under the direction of Stone Ledge Farm.

NEWMONT’S FRENCH BELLBOY (HVK Bell Flaire x French Lace), owned by Good Morgan LLC and under the direction of Broadmoor, made a stunning debut at the brand new Saugerties Summer Showcase as the UPHA 3YO Morgan Park Harness Classic Champion with Dwayne Knowles on the lines. Also in the hallowed halls of Broadmoor, Allyson Wandtke and Cindy Nord’s wonderful World Champion NEWMONT’S GET REAL (Get Busy x ALB Starry Night) has been successfully debuting in the Park Saddle Amateur division with Allyson in the saddle, winning the qualifier and Open Park Saddle Championship at the Saugerties Summer Showcase, as well as the amateur qualifier and championship at the Southern States Regional.

NEWMONT’S MISS MONEYPENNY GCH (Minion Millennium x Aljaks Miss Wham I Am) has a new owner this year in Emily Enke, and Emily and Penny have begun to make a mark in the Jr. Exhibitor Hunter Pleasure division, winning their qualifier and the championship at the 2021 Prairie State Classic.

NEWMONT’S PEPPERMINT PATI (Minion Millennium x Paradigm Hot Chocolate) has been hitting the ring under saddle this year and has reserve wins to her credit in Park Saddle from the 2021 Gasparilla Charity Show, and was recently the Morgan English Pleasure Stake Champion at the 2021 Spring Spectacular, under the direction of Selvin Torrez for the Morgan Horse Farm in Ohio.

Moving from the East coast to the West Coast recently, NEWMONT’S PRETTY PLEASE (SpiceOLife Present Tense GCH x Boxford Magdelina), now under the ownership of Paula Hague, won the Ladies Pleasure Driving qualifier at the 2021 Key Classic Benefit after a reserve in the Open Pleasure Driving, and earned top ribbons at the Morgan Medallion Regional.

Meredith Rosier and her mom, Elaine Rosier have been kicking butt and taking names in the carriage driving division with NEWMONT’S REMEDY (Graycliff Tony GCH x Wiona’s Play Misty For Me). At the 2021 Buckeye Baroque Summer Jubilee, he was the winner of the Morgan Carriage Pleasure Driving and earned red ribbons in Working and Reinsmanship. At the Tri-State All Morgan, they won the Carriage Driving Turnout and were reserve in the Working and Reinsmanship. And at the Western NY Morgan Show, they had back to back wins in the Turnout and Working, with a second place in Reinsmanship. You go, girls!